An important milestone has been reached in the construction of Hapag-Lloyd Cruises’ HANSEATIC inspiration: the new expedition ship started its journey on Saturday, February 16, from the VARD Group’s Romanian site in Tulcea to the VARD Langsten shipyard in Norway. Work on the outer hull of the HANSEATIC inspiration has been under way in Romania since the start of construction in September 2017. The interior will now be fitted out in Norway. 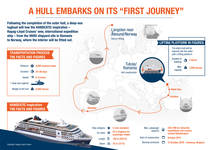 Detail Taking to the water for the first time on Saturday, February 16, the ship’s hull, which weighs around 6,500 ton nes (6,400 imperial tons), was lowered into the water by a lifting platform at the VARD shipyard in Tulcea, Romania, in a process that took three hours. The journey of around 4,000 nautical miles from here to the VARD Langsten shipyard near Alesund in Norway started on Saturday, February 16, and will take the hull via Istanbul and Gibraltar. The deep-sea tugboat Diavlos Force will use a steel cable to tow the hull of the HANSEATIC inspiration on a journey lasting around 24 to 28 days, depending on the weather conditions.

The small, manoeuvrable expedition ships feature cutting-edge technology and have the highest ice class for passenger ships (PC6). Their routes will take the ships from one extreme to the other – from cold polar waters to the warm regions of the Amazon. The construction, design and routes of the new ships focus on providing a true expedition experience, getting as close to nature as possible and incorporating state-of-the-art equipment to minimise the environmental impact.